Detroit chief on heels of weekend that saw 31 shot: ‘We can’t do it all’ 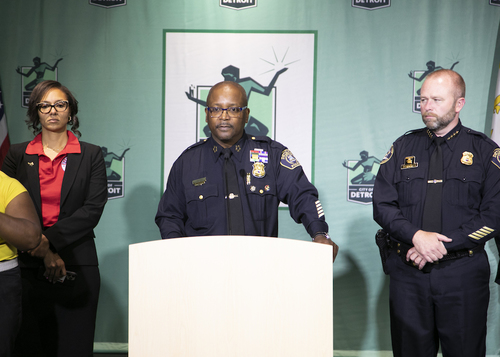 Detroit’s police chief and council president gathered with community leaders Monday to condemn gun violence after a weekend that saw 24 people shot and 7 killed, but were short on meaningful solutions.

Two people were killed and six wounded early Saturday morning when a resident of Coyle Street, on the west side, opened fire on a birthday party at a neighbor’s home following a dispute over parking, officials said. Two 14-year-old girls were shot in a driveby later that night, outside another birthday party on Penrod Street near Joy Road.

While White stressed that “we need to do more,” he did not speak to what his department could do differently, but called on residents and others to do their part, saying "we can’t do it all." Council President Mary Sheffield, meanwhile, called on residents to promote de-escalation strategies.

White urged judges to “keep these violent offenders in custody,” citing without data or specifics previous cases in which suspects arrested by police turned out to be on tether release for criminal charges. He added that he would now direct all felony gun arrest to the US Attorney's Office for stiffer penalties.

“We exhaust everything we do from a policing standpoint,” said White. “The problem is the rest of the process.

“There needs to be a penalty for bad behavior, and I don’t see anyone who has a healthy fear of committing a crime. You have to pause and say I might go to jail, I may do time.”

A suspect has been arrested in Saturday’s mass shooting and is awaiting possible charges. White said the man had a military background and 11 guns “strategically placed around his home in case he was engaged.” Police found him inside his home in the dark after they were told he’d shot from the first and second floors.

Sheffield urged residents to engage one another, and particularly youth, about “how we can de-escalate and not have to pick up a gun.” Also Monday, a 16-year-old was arraigned on a murder charge for allegedly shooting and killing a 13-year-old over a stolen iPhone in July.

“It’s not DPD, they can’t do it by (themselves), the city council can’t do it by itself, government cannot solve this issue by ourselves, we need the community to stand up and to be involved,” she said. “Quite frankly, this is a reflection of Detroit and, Detroit, we are better than this.”

Quincey Smith, a community organizer with Ceasefire, also called on city residents to “stand up.”

“Our children, our youth, our community is under attack,” he said. “Everyone should be outraged. Everyone should feel the weight of responsibility to do something.”

The director of Detroit Wayne Integrated Health was also on hand to offer resources for those struggling with mental health issues.

Even with the weekend crime wave, White said violence in the city is on the decline when compared with this point last year. Homicides, he said, are down 5 percent and fatal shootings are down 15 percent.

The department meanwhile says 50 children and teens have been shot in the city so far this year, 10 fatally. That represents an uptick from past years. Between 51 and 67 kids were shot each year from 2014 and 2016. The department did not immediately respond to a request for more up-to-date figures.