After the 2016 election, Macomb was singled out as one of a handful of counties that lifted Donald Trump to victory in their states, and to the Oval Office. Four years later, Macomb apparently won't play such a pivotal role.

Political observers in this bellwether county are divided in their projections, but even those who believe Trump will score another win here Tuesday are skeptical that the president will come close to matching his 54-42 percent triumph in Macomb over Hillary Clinton. 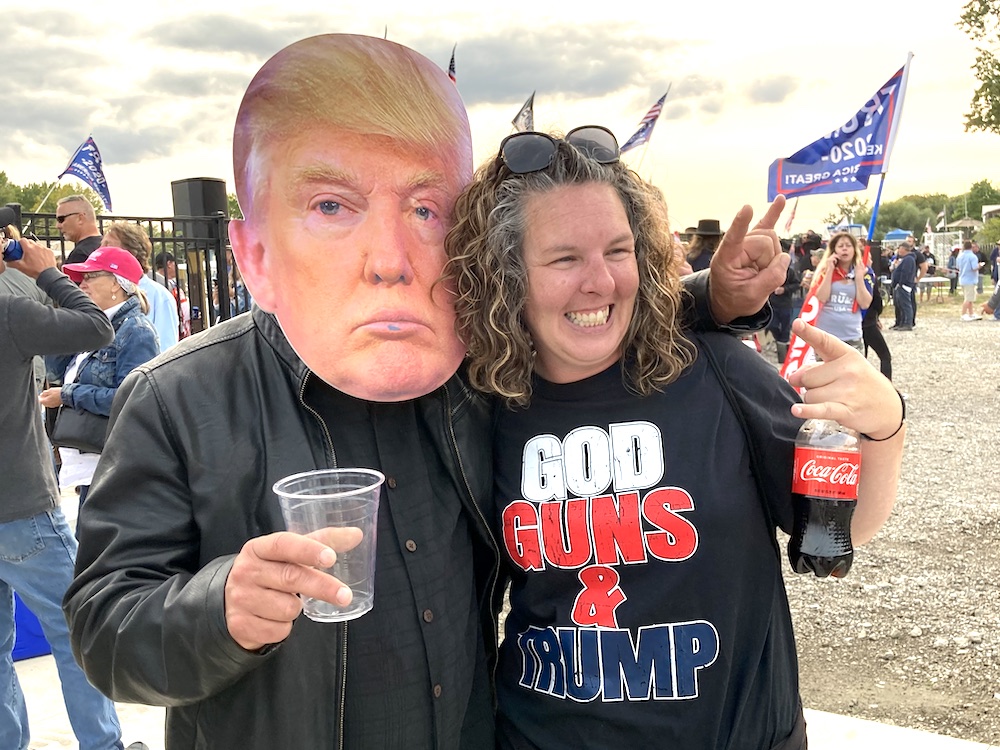 We know who she's voting for. But what about other women in Macomb? (Photo: Joe Lapointe)

“This is not 2016. What Trump is all about is not unknown to anyone anymore,” said a veteran Republican official in the suburban county. The president’s handling of the coronavirus outbreak and his nonstop inflammatory rhetoric have tarnished his image with some traditional Republicans, this official told Deadline Detroit. “So, what they got is not necessarily what they had hoped for.”

The latest statewide poll from Lansing-based EPIC-MRA found Biden with a 51-35 percent lead over Trump in Macomb, a similar margin through the Metro Detroit suburbs, and the Democratic nominee leading statewide by 48-39 percent.

A New York Times poll in Michigan that was released Wednesday offered similar results, with Biden up by 53-35 percent in the Detroit suburbs (the newspaper did not offer a separate Macomb number) and by 49-41 percent statewide. A Detroit News poll has also reported a dramatic advantage for Biden among suburban voters.

Macomb County has a decades-long history of treating election politics like a blood sport. But in 2020, politics here has become a religion – just not in a civilized way.

Despite decades of ticket-splitting voters with an independent streak, a maverick attitude, the same vast partisan divide that wracks the nation has taken hold here. Deep tribal divisions have emerged. With just days before the election, even seasoned politicians, given the opportunity to comment freely on a “no names” basis, cannot bring themselves to set aside party loyalties.

One Republican running on Tuesday’s ballot in Macomb said Trump’s “crude and rude” approach is a big plus in Macomb County, especially among blue-collar workers: “This billionaire,” he said, “speaks their language.” Another GOP stalwart said Trump loyalists are obsessive about the election, but overall the president’s support in Macomb is “deeper than it is wide.”

Pro-Trump voters are loud and boisterous – holding “pop-up” rallies along major Macomb highways – while many Biden voters have been seething for four years in a stew of anti-Trumpism.

A Democratic political consultant said Biden’s low-key approach is “comfort food” for anxiety-ridden Democrats and the outcome on Tuesday will be a “Blue Wave” in Macomb. A Democratic official said that women, especially those repelled by Trump’s comments about Gov. Gretchen Whitmer, will help Biden narrowly carry the county on Tuesday.

Trump supporters, citing the multitude of Trump flags and signs in residential neighborhoods, even in the traditionally Democratic south end of the county, seem certain that re-election is just days away. But the old adage cited by political pros is: “Signs don’t vote.”

Even if the polls are off the mark, as they were in 2016, it’s doubtful that Trumpmania in Macomb can secure Michigan for the president.

Republicans and Democrats are waging intense get-out-the-vote efforts. Early and absentee voting is surging nationwide, and Macomb is no exception. County Clerk Fred Miller reports 260,000 absentee ballots were issued in Macomb as of Oct. 20. If most of those ballots are returned it would swamp the 2016 AV results.

But absentee numbers are only part of the story. Those who vote absentee are no longer confident in casting their ballot through the beleaguered U.S. Postal Service. At city hall in Warren, a daily line of voters on the stairwells wait for their chance to turn in their ballot face-to-face at the clerk’s office.